A Barn Reception For My Parents' 50th Anniversary

Kara Hoffman (daughter) LEXINGTON, KY
We had a 50th Anniversary party for my parents in a barn at a beautiful vineyard and winery near my hometown. Since it was their "golden" anniversary, the theme was shabby chic with gold accents. At first, I was going to design my own centerpieces, but these "ready to go" centerpieces all of the flowers I was planning on buying and then some, and it was a lot more convenient and economical to buy them this way than if I had bought them "a la carte". The first three photos show the 18 centerpieces, or bundles, of flowers I bought after they had been rehydrating in my mother's garage for a few hours. I think the flowers were more smooshed from the box than dehydrated because the water level didn't ... drop significantly. The delphinium looked pretty sad at first, but they really opened up after a day or two and was quite stunning the day of the event. We used blue wide mouth quart sized mason jars for the 10 tables we set. We had plenty of flowers left over for the cake table and the beverage table, and a few arrangements displayed on wine barrels at the door. I also made one larger arrangement by combining all of the flowers from two of the bundles and arranging than in a half gallon ultra wide mouth mason storage jar. That was my mother's favorite arrangement. It is shown in the last two pictures. As far as customer service, I got a call from FiftyFlowers right after I placed the order to recommend that I have the flowers delivered earlier. The event was Saturday afternoon, and I requested delivery on Thursday morning. Since I wasn't arriving in town until Wednesday night, I left the delivery as originally scheduled. I used Floralife Quick Dip instant hydrating treatment, as well as flower food to get them to open in time. I don't know if that made any difference, but the day of the event, about 90% of the sunflowers had opened, and the delphinium had really filled out. I didn't have any further communication with FiftyFlowers until I got a text stating the flowers had been delivered. I did log onto my account the Monday before the flowers were due to be delivered and noticed that they had been assigned a tracking number, so I was able to track the package and I knew when to expect it. My only criticism is that it would have been nice if they had emailed the tracking number to me when the flowers shipped. Show more
Flowers by My mom's friend and I, and whoever else wanted to try their hand at arranging put them in the jars. 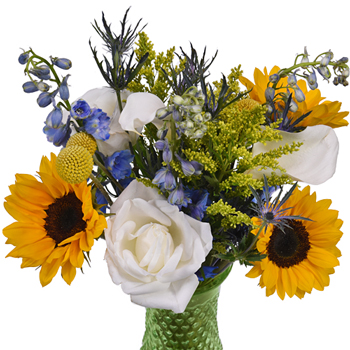 The combination of flowers in this arrangement was just really stunning. The colors and textures really played off each other nicely. I loved the design. Each arrangement had 20 stems as advertised. Each had 2 calla lilies, and three of everything else listed in the description. The thistle was much more beautiful than pictured in the ad with nice large centers. I docked it half a star because the calla lilies were small and some had brown spots. That was the only disappointment. As far as the "ready to go" aspect, we used the combination of flowers as bundled, but we rearranged them. The blooms shipped all rubber banded together at the same height, and I thought the flowers were much more visible and the arrangement more pleasing with the heights staggered a bit. We used wide mouth quart sized mason jars with mason jar "frogs" (grids which fit inside the lid) to arrange them. The 20 stems filled this size jar quite nicely.