Nicole Brandt (Bride) Augusta, MT
Flowers arrived timely (by 10am the day they were to be delivered). My mom and I had no idea what we were doing (we had to go buy buckets to put them in, so anyone new to flowers, be sure to have some large buckets on hand!) We opened them all up, they were package tight and did not look to be damaged. We trimmed the stems and put them in water right away. I made simple bouquets and we banded those together that same day. The other flowers were being used in mason jars (we hung them on shepherds hooks to line the aisle, then moved the mason jars inside for centerpieces). I cut and arranged those the morning of. We had to transport the flowers to our venue (2 hours away). I put them in ... a cooler with some ice packs because I was worried about them falling over otherwise. Worked well. We were able to make sure the mason jars were extra full and we still had a few extra flowers. I received so many compliments on my bouquet and flowers. I couldn't be happier with the flowers and the service from FiftyFlowers.com. Show more 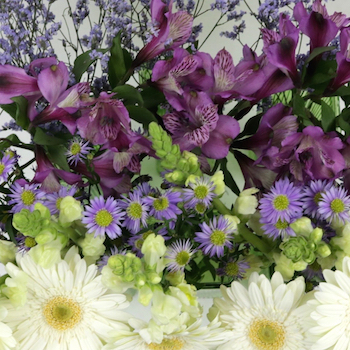 Flowers were beautiful and I received so many compliments on them!