I Went Nuts And It Was Everything

Lucia Cole (Bride) Austin, TX
I wasn’t planning on getting that many flowers from FiftyFlowers until the week of my wedding when I found out that local flowers wouldn’t be available. FiftyFlowers has the BEST customer service and absolutely came through for me! Since about a year before my wedding, I’d been in contact with two local farms to buy flowers from them. I was going to pick them up early Saturday morning for my Sunday wedding. However, we had terrible weather and both farms reached out to me on Monday (six days before the wedding). One said they didn’t have anything, and the other said they only had a small amount (10 bunches). If I were to do it all over again I would definitely still try ... to go the local route because it is so important to support local farmers, but I also can’t say enough good things about FiftyFlowers. I called FiftyFlowers on Monday afternoon and they were able to ship the flowers that I wanted by Thursday and Friday, free shipping. In addition to the flowers from this site, I ended up getting about 40-50 bunches locally (the farm that said they had 10 ended up having more). Therefore, the poppies, the butterfly ranunculus, and some of the ranunculus (white, red, the brighter pink, and the more pastel yellow/orange) in my pictures are not from FiftyFlowers. However, the brighter yellow ranunculus and the “Peachy Watermelon” ranunculus in the pictures are from FiftyFlowers. With all these flowers, I made 1 bridal bouquet, 2 bridesmaids bouquets, 8 boutonnieres/corsages, a garland, arrangements for 7 dinner tables, and about a million other jars of flowers to place around absolutely everywhere. I started arranging them about 8:00 in the morning. My mom joined me at 9:30 and a friend joined me at 10:00. We all worked until around 12, took a lunch break, and then they both left around 3:00 and I continued until 5:00. In total that’s about 22 hours of labor hours. It got rushed towards the end and I wish I had a few more hours, but live and learn! Having the day to arrange flowers with some of my favorite people was so fun and such a special part of the weekend. In case it helps, here are some details about how we made everything. We are exactly the opposite of pros, but it all worked out great. Bridal bouquet: I held it in my hands as I went, started with the largest flower in the center, and worked out. When it was too much to hold without the bouquet falling apart I’d wrap the wire around the stems (with another set of hands for help!), and then when it was secure again I kept adding more flowers. In the end, I added some Ruscus, wired it again, and then used ribbon to cover up the wire. Corsages/boutonnieres: I made the tiny arrangements in my hand, then wrapped the stems together with green floral tape. Then I wrapped that in either ribbon (for the corsages) or twine (for the boutonnieres), but I left the stems long and hydrated in a dish of water. I cut the stems short once we were at the venue getting dressed. No idea if this was necessary, but everything held up with no problems--even the ranunculus and scabiosa. Dinner table arrangements: Each table had 9 jars: 3-quart jars, 3 medium jars (roughly a pint, but in various shapes), and 3 small jars. For some of the quart jars (dinner table and other quart jars that we set out all over the place), I used clear floral tape to make a grid, then screwed the outside part of the lid over the tape to keep it secure. The tape wasn’t really necessary but it was helpful. The arrangements were perfect because they were huge but not too tall so people could still see each other. Garland: I ordered a garland from FiftyFlowers as a base. I also ordered extra Sprengeri Greens and Ruscus to stick into the garland to make it fuller. I was surprised how easy it was; we didn’t end up needing to wire it or anything, and the greens lasted just fine out of water. I also stuck some artificial poppies in it that I happened to have (the white and yellow flowers). In addition, we cut a bunch of other flowers short (used leftover garden roses and disbuds), stuck them in floral water picks, and transported them to the venue separately. We zip-tied the garland to the arch and then stuck the floral picks in (again no tools or wire necessary). After the ceremony, a couple of friends moved the garland from the arch to the swingset, and after the wedding, my dad took the garland and repurposed it, flowers and all. It lasted a long time! Our flowers were just incredible and I loved the thrown-together look. It took absolutely no skill or practice; the flowers were so beautiful on their own that they didn’t need anything except a jar of water. Everyone said they were the most beautiful flowers they’d ever seen! At the end of the night, we asked everyone to take home as many flowers as they wanted and some people’s reactions were so cute! It felt amazing to be able to send our friends with (literally) boxes full of flowers! Show more
Flowers by Lucia Cole 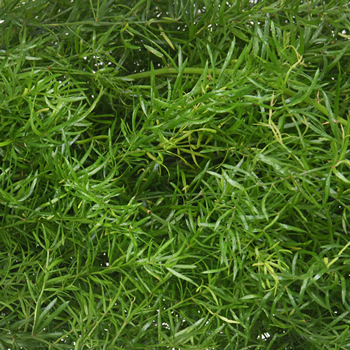 So plentiful! 5 bunches took up one and a half 5-gallon buckets (crammed full). I purchased a garland made of Ruscus, Plumosa, and Sprengeri Greens, and then I used extra bunches of Sprengeri Greens and Italian Ruscus to fill in the garland to make it thicker and more wild/messy-looking. Honestly, I ran out of time so I only used about half of the Sprengeri Greens bunches that I ordered, but it was still fantastic. It was super easy to stick the stems into the garland, no wire or additional materials needed. We did the assembly Saturday for our Sunday wedding, so the greens were out of water that whole time. It wasn't a problem at all and they lasted well beyond the wedding. 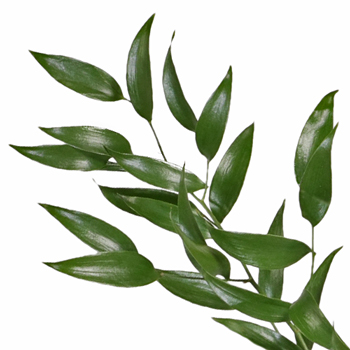 5 bunches of this didn't get me nearly as far as 5 bunches of the Sprengeri Greens in terms of quantity, but the Italian Ruscus is gorgeous and just what I needed. I purchased a garland made of Ruscus, Plumosa, and Sprengeri Greens, and then I used extra bunches of Sprengeri greens and Italian Ruscus to fill in the garland to make it thicker and more wild/messy-looking. It was super easy to stick the stems into the garland, no wire or additional materials needed. We did the assembly Saturday for our Sunday wedding, so the greens were out of water that whole time. It wasn't a problem at all and they lasted well beyond the wedding. I also used some Italian Ruscus in my bridal bouquet and it was lovely! 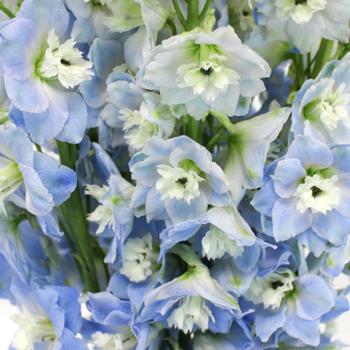 Very delicate but beautiful. Lots of blooms fell off the stem throughout the whole process, but there are so many blooms that you couldn't even tell there were any missing, and we used the ones that fell off for our "flower girl" (flower grandma) and several girls in our family had fun sticking them in their hair. The flowers are super tall, so most of the time I cut them in half (the bottom half looks beautiful and it's not obvious that it's missing it's top). The top is a bit less blue, mostly still green. 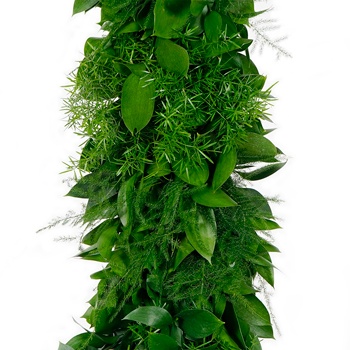 Love this!!! I added more Ruscus and Sprengeri Greens just by purchasing 5 extra bunches of each and sticking the stems into the garland to make it more full. It was super easy and I highly recommend it! The garland was perfect for us. I used it over the arch where we got married (got 24 inch zip ties, which were way longer than needed), and then a couple friends moved it to our reception area and zip tied it to the swing set. 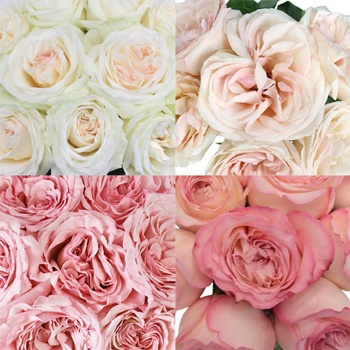 All gorgeous. They definitely came sleepy looking, but by the wedding day they were breathtaking. I ordered two sample packs: white blush x 3, true white x 1, powder pink x 1, miso pretty x 1, smiles in the sky x 1, and classic pink garden spray roses x 1. The Miso Pretty and Smiles in the Sky were easily my favorite just because of the unique colors, but they were all amazing. I think the Powder Pink was the largest. They’re all surprisingly hardy--much more so than any of the other flowers I ordered. Not a single one was broken out of two packs. I used one stem of the spray roses in my bouquet and most of the rest of them for corsages and boutonnieres. 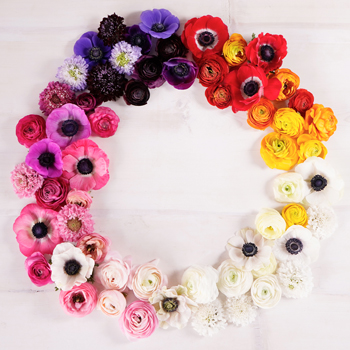 I ordered two of these packs in different colors. For the first I got Anemones in the color White with a Hint of Blush, Ranunculus in the color Peachy Watermelon, and Scabiosa in the color Lavender Blush. For the second I got Anemones in Red, Ranunculus in Yellow, and Scabiosa in White. All were gorgeous. The Anemones were perfect. The Ranunculus was beautiful, although both colors were much smaller than the Ranunculus I purchased locally. The Scabiosa stems are delicate and a few broke, but they came with plastic straws on them which I left on because they’re hardly noticeable and they’re super helpful for keeping the stems intact. My very favorite of all the flowers in the Delicate Garden DIY Flower Combo was the White Scabiosa, which really surprised me. It was my least favorite when I was choosing the flowers, but it’s incredible in person. It’s a perfect combination of elegant, bridal, whimsical, and wild. 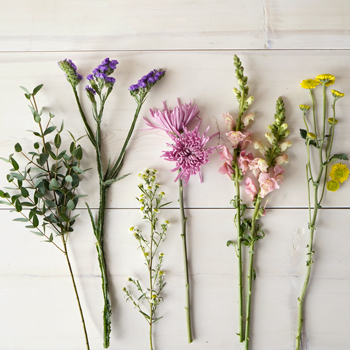 I got two packs of Wild About You DIY Wedding Flowers. I’m so glad I did because of the awesome mix of flowers! Not everything was great quality in this mix, but it was such a good price to begin with that it was still an awesome deal. Asters: 5/5. I love them! They are so cute and tiny and wild-looking!!! Snapdragons: 5/5: Gorgeous, tall, hardy, perfect. Disbuds: ⅘: Around 4 or 5 buds were broken off the stems when they arrived, although I used them as floating flowers just around my house. The rest of the flowers did fine. Button poms: 5/5. Hardy and great pop of color. Parvafolia: I really wanted to love it (if I were to pick any type of eucalyptus based on looks alone, it would easily be this) , but it dried up so quickly, even being in water the whole time. I went ahead and used most of it but it honestly looked like it was weeks old by our wedding date. Statice: 5/5. Beautiful color, and I dried it after the wedding and it’s still in a vase, just as beautiful as before.