Diana Rosen (Bride) South Lake Tahoe, CA
We had initially planned to order a whole bunch of flowers for our wedding on 4/11/2020, but then COVID-19 happened. We shifted gears and decided to elope on our honeymoon instead, and to push the reception until next year. Luckily I was able to cancel my previous order and use the credit to get a bouquet and boutonniere for our elopement. FiftyFlowers helped so much with scheduling the shipment to a local FedEx so I didn't have to worry about the flowers being delivered to our lodging in California as we were flying from Connecticut. Unfortunately, our shipment was delayed by a day and this had a significant impact on the flowers. They had been scheduled to be delivered on Monday for a Wednesday ... ceremony, but we were notified of a delay until Tuesday. We played around with heat and lighting to assist the flowers in opening, but the time crunch in addition to how tight the bouquet was kept the flowers from opening - including all but one garden rose, and the protea (which I had been looking forward to the most.) The one garden rose that opened was an "extra stem" that we had tried to add to the bouquet, but it was already so tight that we had to add to the outside of the stems and wrap with additional twine and sort of ended up sitting on top of the rest of the flowers. The scabiosa were a little floppy and seemed a bit better when hydrated. Luckily it still looked great in photos, and there were no issues with the boutonniere. I had placed the bouquet in water after the ceremony, hoping that the flowers would continue to open up, but unfortunately they began to decay within a few days. We had a much better experience with the stems that we had purchased for the wedding shower, so we were surprised by some of the differences. Show more 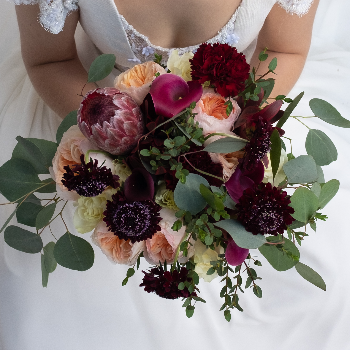 This bouquet had a great assortment of flowers and texture, however was not as "loose" as shown in the images, which was what I was going for.