Stanley Straub (Spouse) LEBANON, OR
My wife and I got married after losing our spouses. I lost my wife after 52 years of a wonderful marriage and my wife lost her husband of over 53 years. After we found each other via an online dating service, we got married on 21 December 2013. Since that time, we celebrate each month on our anniversary day. It may not be traditional but to us, it's the world. For our anniversary date in August, I wanted to do something special for my wife. I found the "Donna" peach-colored roses at FiftyFlowers and knew that they would be perfect for my wife, Donna. The roses arrived right on schedule via FedEx and I opened the well-packaged flowers in the garage and put them in a large vase that I bought, ... filled the vase with water, and took them into the house and gave them to my wife. She was so thrilled at their beauty that she cried. She is not in the best of health and the fifty beautiful "Donna" roses really perked her up. I want to thank you for giving my wife a lift with your well-packaged and hand-picked roses. They were perfect. Sincerely, Stan & Donna Straub Show more
Flowers by FiftyFlowers 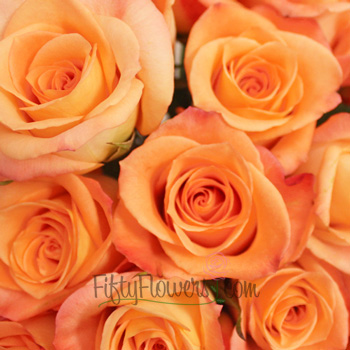 My wife received the roses today via FedEx. They're absolutely beautiful and she loves them. Her name is Donna and she loves how they smell and how they look. Thank you so much for sending such beautiful flowers. The fifty flowers fit perfectly in the vase I bought. Sincerely, Stan Straub

I took the photograph myself