Samantha (Bride) PATTON, PA
Evan was born and raised in south Texas, and I was born raised in a small town in central Pennsylvania (not even any stoplights). His parents were from the area here in PA but moved down to Texas about 30 years ago. Still having family up here, they visited often and after Evan graduated from Texas A & M University, he moved up to Pennsylvania to be closer to the family. He also loved the PA weather. The summers, the beautiful autumn trees reflecting like a mirror off of Glendale Lake at Prince Gallitzin State Park. He loved to ski and eventually taught me how to ski and how to ride a dirt bike. After Evan moved up, his parents, his sister and her husband and child also moved up to PA. His ... parents ended up buying the property from my parents and that's really how we met. The Christmas before, we were both in Lowes, Christmas shopping with our dads and that is when Evan first saw me and was smitten. Ha. I wish I could say I noticed him too and it was loved at first sight. But....while our dads talked, I was much too busy texting to notice my future husband standing in front of me. I was homeschooled and mentioned to Evan that I wish I had gone to a Prom. So being the romantic he was... he threw me a prom! He rented a community hall for November 3rd, 2017 and with help from family and friends, turned that cinder blocked wall hall into a palace. We have been dating a year and this night, Evan would ask me to be his bride. He brought in a large box and inside was a German Shepherd puppy! I absolutely love dogs, and he went and got me one of my very own. His sister recorded it all and we are on Youtube! If you would like to check it out: https://www.youtube.com/watch?v=BDv2UBj3eoU Planning was so much fun and it truly was the best day of my life. The only thing I would change would be the temperature. It was in the mid-80s and the sun was shining brightly. It looked beautiful, but dang was it hot! Show more 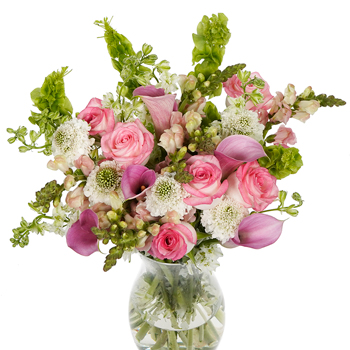 Beautiful flowers! Received many compliments on them and I have recommended FiftyFlowers to other newly engaged girls I know. Super big thanks to Fran, my FiftyFlowers Affiliate, who helped me